What is the Internet?

The History of the Internet

The Internet began as ARPAnet, a U.S. Department of Defense project to create a nationwide computer network that would continue to function even if a large portion of it were destroyed in a nuclear war or natural disaster. During the next two decades, the network that evolved was used primarily by academic institutions, scientists and the government for research and communications. The appeal of the Internet to these bodies was obvious, as it allowed disparate institutions to connect to each others’ computing systems and databases, as well as share data via E-mail.

The nature of the Internet changed abruptly in 1992, when the U.S. government began pulling out of network management, and commercial entities offered Internet access to the general public for the first time. This change in focus marked the beginning of the Internet’s astonishing expansion.

According to a survey conducted by CommerceNet and Nielsen Media Research in early 1997, nearly one out of every four Americans over the age of 16 is an Internet user. And the number of users worldwide is believed to be well into the tens of millions.

How Does the Internet Work?

The Internet is a worldwide collection of computer networks, cooperating with each other to exchange data using a common software standard. Through telephone wires and satellite links, Internet users can share information in a variety of forms. The size, scope and design of the Internet allows users to:

An additional attribute of the Internet is that it lacks a central authority—in other words, there is no “Internet, Inc.” that controls the Internet. Beyond the various governing boards that work to establish policies and standards, the Internet is bound by few rules and answers to no single organization.

What is the World Wide Web?

The Internet is a worldwide, publicly accessible series of interconnected computer networks that transmit data by packet switching using the standard Internet Protocol (IP). It is a “network of networks” that consists of millions of smaller domestic, academic, business, and government networks, which together carry various information and services, such as electronic mail, online chat, file transfer, and the interlinked web pages and other resources of the World Wide Web.

The History of the Web

The first rumblings toward this concept began immediately after World War II, when scientists were desperately seeking ways to organize and share their accumulated wartime research. In 1945, noted scientist Vannevar Bush published an essay in Atlantic Monthly titled “As We May Think,” which proposed a massive information index that people from all over the world could access and search. Although Bush’s system was mechanical (and was never developed), his essay had a profound impact on many who would one day help design the Internet and the World Wide Web.

Given this background, the actual Web was originally conceived as a way for physicists to share their research data. In 1989, Tim Berners-Lee led a team at Switzerland’s European Particle Physics Laboratory (CERN) in developing the initial World Wide Web standards. Key among these was the use of hypertext or “hot” portions of an online document that, when selected, take the user to a related, or “linked,” document.

Computerized hypertext was pioneered by researcher Ted Nelson in a system called Xanadu, which he created in the early 1960s. Although Xanadu was never fully realized, many Web’s developers have cited it as an influence on their work.

The next great innovation for the Web came in 1992, when programmers from the National Center for Supercomputing Applications (NCSA) at the University of Illinois developed the Mosaic browser, Look it up! a software application that displayed not only the text of a Web document (or page), but embedded graphic elements as well. By bringing multimedia to the Web, Mosaic vested it with enormous potential.

Today, several Web browsers are available for IBM, Macintosh and UNIX-based computers, and most of the major online services include Web browsers in their standard software packages. The Web is growing at a phenomenal rate. According to Interactive Week magazine, the number of Web servers (computers that store Web pages) surged from fewer than 3,500 in April 1994 to more than 40,000 in July 1995. And in February 1997, the computing firm Network Wizards determined the number of commercial domains alone to be well over 700,000.

What is an Integrated T1?

What is a PRI?

What is a Dynamic Integrated PRI?

In a nutshell, all channels are carrying data to increase bandwidth, but voice traffic has priority.

What is a VPN?

A VPN provides a private, end to end, secure connection for sharing data between company locations.

What is Ethernet Local Loop (ELL)? 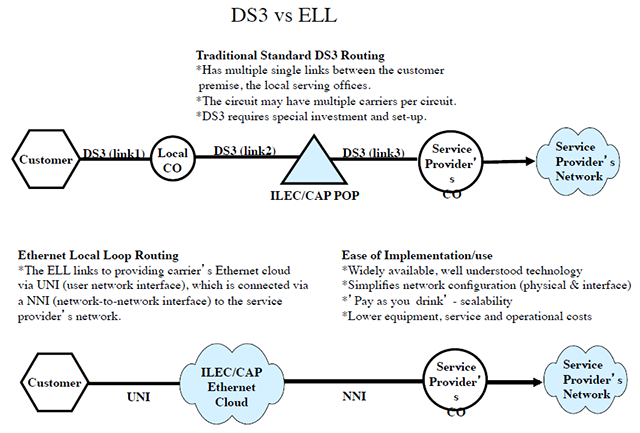