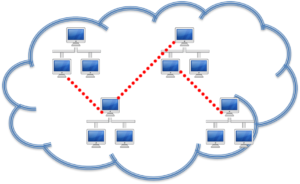 Simply put a Wide Area Network or WAN links separate office locations together.  If the WAN is set up properly, staff should be able to communicate with a remote worker in virtually the same time as they can with one of their co-workers ‘down the hall’.  This is the first and primary goal behind Wide Area Networking.  Additionally, a Wide Area Network is private.  Outside parties are not allowed to use the network without permission.  Not only is this important for security it’s also important to ensuring performance stays at the level needed by the organization.  On the other hand, in a public network environments like a Wi-Fi or cable service, there’s little control over usage and therefore performance.  During certain times of the day a public service may perform quickly – while at other times, when there are many users accessing the network simultaneously, performance may very slow or unavailable.  This is lack of performance certainty and security are just a few reasons why businesses invest money and time into private WAN networks!  But how does a private, Wide Area Network actually LINK separate office locations together?

Point-to-point circuits can use copper or fiber medium to physically connect locations together.  P2P networking provides a very secure and stable way to connect locations.However, a P2P network has certain limitations.  For one, P2P can be very expensive and time consuming to install.  P2P circuits are also limited in terms of customer visibility and network customization. 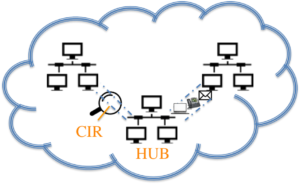 Frame Relay is a wide area network technology using virtual paths between locations. Frame uses a packet-switched methodology to transfer data on the network.  Frame Relay operators control the amount of data passed from each node using CIR or Committed Information Rate. Once a CIR is assigned to a path it can only be changed via a MAC order with the carrier.All routes must come back to the HUB first before data can be sent to other destinations.  This ‘Hub and Spoke’ arrangement can create congestion and bottlenecks during peak hours of usage.There’s no QoS prioritization.  All data including voice, Internet and file sharing, compete to move packets across the network.  This open ‘playingfield’ can result in packet delay can make voice quality very unreliable. 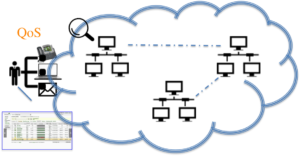 Today’s networks are becoming more flexible by replacing physical P2P circuits with virtual ones.  Virtual circuits are quicker to install and easier to manage.  MPLS or Multi Protocol Layer Switching is a case in point. MPLS uses ‘virtual paths’ to link locations together.  Like a P2P link, these paths provide speed and private connection but also offer a much more flexible and precise way to distribute traffic from user-to-user.  In an MPLS network, specific applications (IM, voice, email, web traffic) can be prioritized so the most important information gets the most bandwidth.  Additionally, MPLS networks allow the customer to view and dictate how their networks behave.  The best network providers allow clients more control.